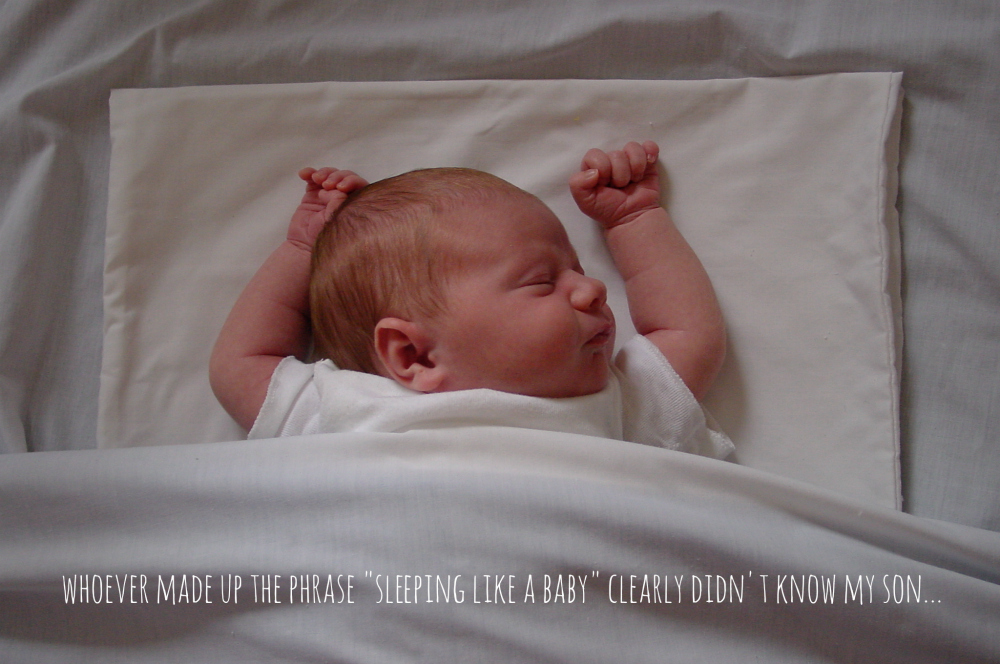 In all this time working in Montessori education, there is one topic I have avoided writing about. You guessed it – sleep.

During my observations for my Montessori training and when I worked in a Montessori nursery, I observed a lot of children falling to sleep. Every child is so different. You have children who fight sleep, being super active right up to the moment they crash. And others who seemed to love sleeping.

Sleep seems to be such a personal decision: there is so much seemingly contradictory advice and a whole lot of tired parents out there doing their best. You have families who co-sleep and feed during the night; and others who have a schedule and the child sleeps in their own room.

I don’t think there is a right way for everyone. It’s just what’s right for you.

I struggled with sleep with my first child. So today I’ve decided to write for the first time about sleep and perhaps you can learn from all my mistakes. And what went better the second time around.

When my son was born, I read a lot of parenting books and thought that if I meet his needs, he should not need to cry. But as soon as I lay him in his bed, he would immediately start crying.

So I picked him up and for hours and hours I tried rocking him, singing to him, swaying with him, letting him suck on my finger, you name it I probably tried it. And when nothing else worked, I breastfed him to sleep. This often gave him tummy pains and we fell into a vicious circle where he couldn’t sleep, I’d feed him and he’d have another sore tummy. Then he’d be crying anyway, despite all my efforts.

Once I got him to sleep he wouldn’t sleep for long periods. He would wake at the end of every sleep cycle when he stirred, wondering why I wasn’t rocking, singing or swaying any more.

My son was dependent on me to sleep and I was like a sleep-starved zombie after just a few months.

In hindsight, it’s easy to see what went wrong. We all stir in our sleep and if your pillow has fallen off your bed, you wake up and look around for it. It’s the same for my son. He would get into light sleep, stir, and the conditions in which he fell asleep were no longer the same. I wasn’t there feeding him or swaying or my finger was gone.

And the big thing was I was trying to get him to sleep. It’s not really something you can do for someone else, if you know what I mean.

Let’s see what I tried second time around with my daughter.

I was determined not to make the same mistake with my daughter and had the wisdom of having been through it once before. So this is what I did second time around.

1. Sleeping is not different from any other part of parenting

What I realise now is that I feel most comfortable as my children’s guide, not their boss (or their servant). As I say, give your child just-as-much-help-as-they-need.

The same applies for sleep. I wanted to give my daughter just as much help as she needed, without her becoming dependent on me, or expecting her to do it completely by herself.

From the time she was born, I gave her a regular routine with a loose schedule so she learned what would be coming next.

As a newborn, she would feed, then “play”, then sleep. It was always the same but not on a fixed 3 or 4 hour feeding schedule, just as it happened. Once she was a few months old and wasn’t waking from her naps hungry, I added another play on waking, then feed, play, sleep.

By having a regular routine, I didn’t think, “Maybe she isn’t tired” when she didn’t settle and try to feed her again.

Instead, when she was unsettled, I would put her in a baby carrier on my front facing my chest and give her a rest there for her nap-time, say for an hour. Most of the time, she would fall asleep there in any case. Otherwise, she would keep mostly quiet and have a rest, feeling secure close to me. Then we would pick up with the next feed at the end of her rest.

3. Provide a consistent place to sleep

Her favourite place to sleep was in her bed at home in a dark room, so we tried to be home for most of her nap times. I felt like a protector of her sleep and would arrange our activities around sleep times.

After I fed Emma, she spent most of her play time on a movement mat with one or two toys. I would talk to her and give her a commentary on what her brother and I were doing.

As she was on the mat, I could observe her closely to see when she was getting tired. As a young baby, she would rub her eyes and get jerky movements. As she became a toddler, she would get very cuddly as she got tired, yawned a lot, and you could find her holding onto your leg (or even the curtains!).

It’s easy to let good sleeping habits slip when your child is sick, you are travelling or they are teething. During these times, there could be wakeful nights and irregular sleep times. But it didn’t take more than a night or two to guide her back to our regular routine once she was well again. And we managed to avoid most sleep regression problems.

6. Sharing a room has ups and downs

My kids shared a room until they were teenagers. The positive side is that they had company when they went to bed. The downside is that if one of them woke early, they were usually both awake.

We had clear rules about turning off the light at an agreed time. And they could get up and play once they were awake. Sometimes we were lucky and the other one would keep sleeping. As they got older, this turned out to be an advantage as they could play together while I’d keep sleeping for a bit longer!

Before she was one, I started offering her a book to read while she rested. It was a nice way for her to rest without feeling as if she was being forced to sleep. And I would often come in to find her asleep with her book open on her chest.

8. No such thing as sleeping bags

Back in the day, there was no such thing as sleeping bags for babies. I’m kind of grateful that 12 years ago, sleeping bags weren’t used as they are today. Whilst they keep a child warm, the child loses a lot of freedom of movement while they sleep. And independence on waking. It may not be an issue for you, but one I didn’t have to face as sleeping bags just weren’t so available.

And that’s really it. I never resorted to feeding her to sleep, rocking her and the like.

With my son, I made the mistake of trying so many different things to get him to sleep. We have a tendency to try everything at once, or change our minds, and nothing seems to work.

Instead, when you reach the point where you are too tired and you are ready to make a change, this is what I’d suggest:

1. Tell your child the day before that things are not working and that this is how things are going to go from tomorrow.

2. Stick with something for at least a week and write down on the fridge how things are going so you have an objective record.

4. Speak positively about sleep – rather than saying “It’s time to sleep” or “You have to sleep now” or “I need you to sleep”, you could try “Yay, we get to have a rest now”. I know that’s what I think about getting into bed every night. I love sleep….

So was I right or wrong to avoid writing about sleep for this long. Let me know if this article has been useful!

PS There is a great article here about 3 different babies and what you can learn from their sleep.